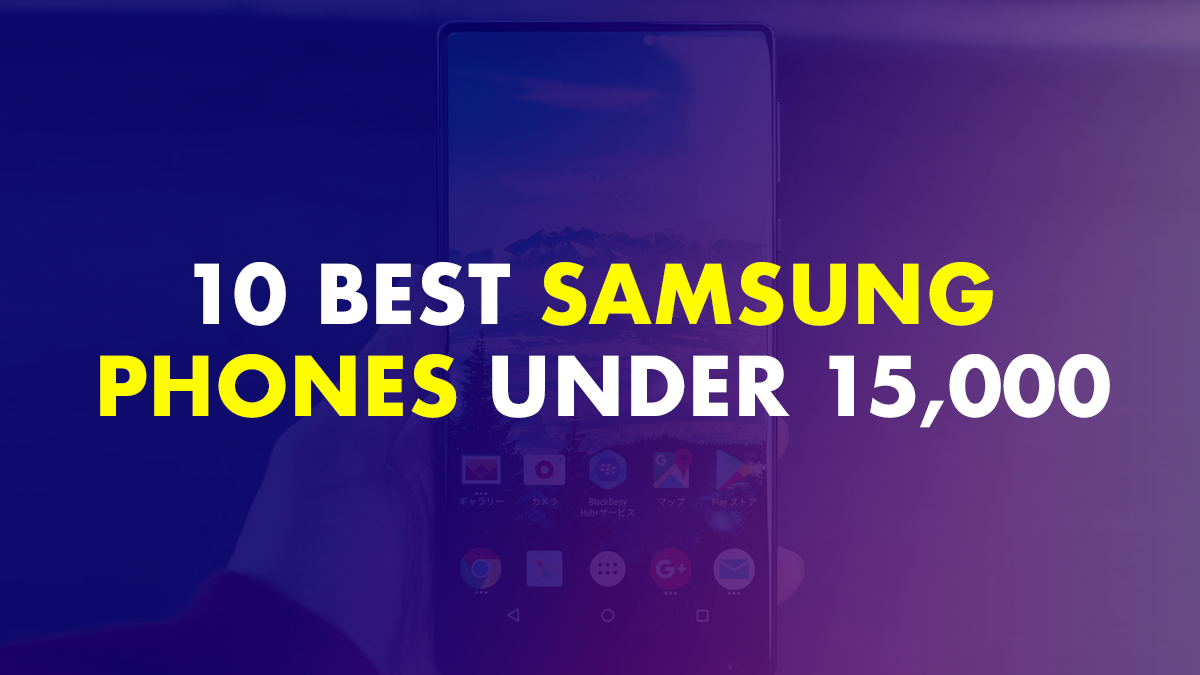 Samsung phones have always been popular for their premium quality phones at a reasonable price. The market of Samsung users happens to be as big as the iPhone users and therefore the brand has launched a range of phones under a very affordable range of Rs 15,000.

Check out these wonderful Samsung phones loaded with numerous astounding features under a budget of Rs 15,000 only.

TechUnfolded is supported by its audience. When you purchase through links on our site, we may earn an affiliate commission. Learn more

The galaxy M31 is one of the finest and latest launches by Samsung. Being one of the most popular mobile phone manufacturers, Samsung ensures some of the very expected requirements of the users to be met through this top-notch model.

The specifications of this mobile phone include:

The camera is one of the most highlighted features of this mobile phone by Samsung. The battery capacity is also very appreciated by the users and the reviews and ratings on this mobile phone suggest every possible reason why the Samsung Galaxy M31 tops the list of best Samsung mobile phones under Rs 15,000.

Another similar mobile phone from the Samsung M series is the Galaxy M21 which offers a range of features. This mobile phone by Samsung comes in 2 variants based on the RAM and ROM storage, that is the 4GB and 6GB RAM models.

This phone is loaded with a range of extraordinary features, and some of them include:

This is certainly one of the best options to consider while looking for the best Samsung mobile phones under 15,000.

Under a price segment of Rs 15,000, the Samsung Galaxy M30 S is one of the finest mobile phones. This mobile phone by Samsung is equipped with powerful RAM storage of 4GB and ROM storage of 128GB which is expandable up to 512 GB.

It also has a powerful battery of 600mAh long-lasting capacity for uninterrupted long hours of usage. The phone has received plenty of reviews which suggest that it is one of the finest phones under this budget.

The specifications of this phone includes the following pointer:

This is one of the finest products that you can find under a minimal budget of Rs 15,000 that too from a premium brand like Samsung and avail every possible feature expected.

The Samsung Galaxy A50 is a very potential option to look for under a price range of Rs 15,000. Some of the highlighting features of this phone include its revolutionary triple camera, AR Emoji and Hyperlapse video recording feature.

The camera of this phone has the capacity to capture 123 degrees of ultra wide video and focus right on the subject making the background and depth very effectively blurred to get your instagram perfect picture.

Specifications of this phone include:

These were some of the features that this phone is loaded with, and it meets almost every expectation that mobile phone geeks and active users of Samsung expected. It is definitely one of the best Samsung mobile phones by Samsung that you can find under a minimal budget of Rs 15,000.

The Samsung Galaxy A30 makes it to the 5th in the list of best Samsung phones under Rs 15,000. The model comes with a premium look, curved corners and a narrow frame. It has a massive display of 6.4inches (16.26cm) that supports up to 16M colors. It is a fully high definition display. One of the highlights on this phone is the triple camera setup capable of capturing images of high crisp quality.

Some of the highlighted specifications of this phone are mentioned below:

The mentioned were some of the details about this phone which justify the reason why it is listed among the best phones by Samsung under Rs 15,000.

It isn’t shocking at all to find another Samsung A series phone in the list of best Samsung phones under 15,000. The Galaxy A21s by Samsung is one of the very well accepted mobile phone devices which the market responded very well too. The highlight of this phone is the powerful 500mAh battery for long-lasting usage and also comes with an astounding quad camera setup.

The reviews and rating on this device so far is great and therefore it makes it to the list of best Samsung mobile phones under 15000.

The Samsung Galaxy A20s is loaded with some of the most extraordinary features for which it becomes one of the very potential choices for phones by Samsung under 15000. The versatile triple camera setup makes this device more desirable and not to mention the 3D prism design feels absolutely perfect.

The notch display is one of the very expected features that this display stands for, and it comes with AI face recognition technology for unlocking the device. It has a 4000mAh battery and type-c charging port with fast charging option. The octa-core processor makes the device perform multiple tasks with any hassle or lag.

The reviews and ratings on this device are quite satisfying and suggest that this is one of the very deserving products from Samsung that people can consider purchasing under a price of Rs 15,000.

One more product from the Samsung M series. The Galaxy M11 is no-doubt one of the best phones to consider under a price of Rs 15000. It comes with a front-facing punch hole camera or the on-screen camera of 8MP and the Rear camera is a triple camera setup that clicks extraordinary crisp quality pictures.

This device does come in 2 variants considering the RAM and ROM. The variants include 3 GB and 4 GB versions. The device runs on the latest Android v10.0 and a 1.8 GHz Qualcomm octa-core processor.

This Samsung device has received tremendous response from the audience and the features of this device are very well accepted which makes it a must-consider option when it comes to best Samsung mobile phones under 15000.

The Samsung Galaxy A10s is equipped with some of the very outstanding features that make this phone a potential choice under a budget of Rs 15,000. The narrow edge display provides the user with an immersive viewing experience and the dual rear camera clicks high-quality crisp pictures. It comes with a powerful and long-lasting 4000mAh battery and the face recognition unlock feature makes it a very desirable handset to have hands-on.

The mentioned specifications make it a very deserving phone by Samsung under a minimal budget of Rs 15,000.

The Samsung Galaxy M01s is definitely one of the best options we have for a phone under Rs 15000 and the specifications of this phone make it highly worthy of the price it holds. It comes with dual rear camera setup and a front camera of 8MP.

The phone operates on Android v9.0 pie and supports up to 16M colors. The 15.79 cm massive display with the infinity cut provides the user with an immersive viewing experience. Some of the highlighted specifications of this phone include:

These were only some of the highlighting features of this, however, there is a lot more to these.

These are some of the best Samsung Phones to consider purchasing while looking under a price of Rs 15,000. Do share your thoughts and feedback by commenting below.