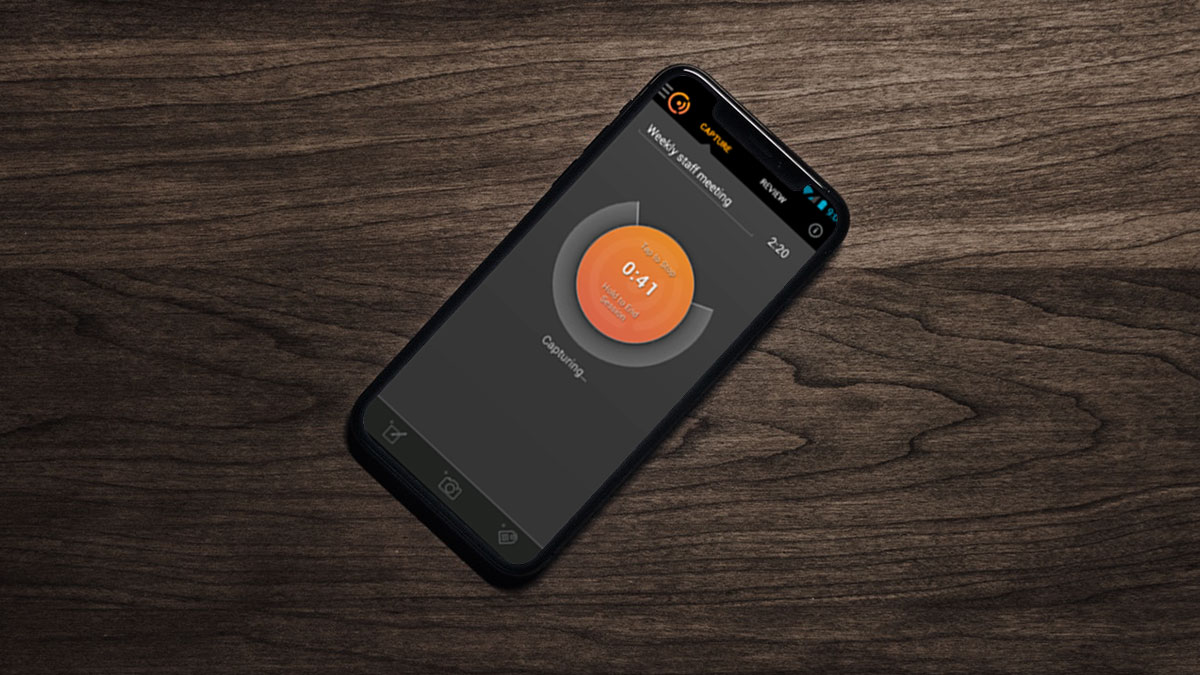 Parrot is probably the most beautiful, as well as the most feature-rich audio recorder on the list. The UI is pleasing and makes using the application much more fun and entertaining.

The free version will allow you to use the mic, Bluetooth, or speaker for recording. You can see calendar style icons on the recordings to help you identify the date in which you recorded the meeting or lecture. It supports Android Wear.

You can remove the background noise and echo, and also control gain where you need more power. It comes with support for the different recording formats. This can be set to stop and start automatically based on the sound threshold to skip silence parts at the time of the recording period.

Cogi, made a list because it only provides with a beautiful UI< but also a feature that no other application offers. The developers wanted to augment the experience by allowing the users to take better notes.

To achieve that, they added some of the functions to take pictures and save it with your audio recordings. It makes so much sense.

Cogi actually provides the features that will come in handy and will be used by a wide range of people during voice recording.

Much more than just an ordinary voice recorder, the RecForge II is loaded with a wide range of functions via which users would truly enjoy. It doubles as an audio editor and file manager where you can easily rename, move, copy, delete, convert, and sort your audio recordings into the different formats. This app equally features the time stretching with pitch adjustments and playing rate long with several options such as the scheduled recordings, archive recordings, cloud storage, skip silence, and many more.

Voice Recorder HD is highly regarded in the voice recording circles. The app provides the customization for the audio quality, support for the playback on the Operating System. It even comes with the built-in support for the Dropbox and some other cloud-based storage options. You can easily choose which device you want to record with. If you are in the middling of any recording, but you want to open another app, then you don’t have to interrupt the recording as it will even continue to work in the background.

Hi-Q MP3 Voice Recorder is also a reliable voice recording app for the Android smartphone. The app offers various customization options. The app is easy to use and simple. Recordings are saved in the MP3 files, but you can also change it to record in M4A, FLAC, WAV, OGG formats. It also has an option for the automatic upload of recordings to Google Drive and Dropbox. There is also an option to keep a home screen widget for the quick start, resume, and pause recording. Depending on the device you have, you can select the front microphone or back microphone if you wish to.

Zoho is more of a note-taking app that implements voice recording rather than intuitively. You can even create a separate notebook to keep your notes categorized. Recording Notes is a one-click function, and you can see the whole recording as a waveform, which looks so cool. You can customize the color of the audio note, rename and move it around the different notebooks.

One small feature which makes it the app excellent is the alarm feature. You can set a reminder on your recordings and receive a notification when it is time to review the audio file. To keep the contents private, use the lock feature to secure the files just within the app.

The next best voice recorder app for the Android is Snip Back. The app is download by the 10000 people with a rating of 4.5 out of 5. The size of the app is just 5.5 MB. For taking audio notes, conference recording, and for journalism. It is a very clean and neat app that is designed for the best user experience.

Some of the features like a hidden voice recorder can be a very handy app for someone who wants to record someone without even letting them know.

Cube Call Recorder ACR is the only app on this list that not just only lets you record your normal phone call but also calls from the various VoIP services, which include the Hangouts, Facebook, IMO, Whatsapp, Viber, Skype, Slack, Telegram and much more. The best part about this app is that it is completely free to use and does not have any advertisement inside. With the help of a Cube Call Recorder ACR, you are getting one of the best recording experiences for free of cost.

Otter is one of the most advanced voice recording apps on the list. Otter is not just an audio recording app; it also transcribes in the real-time scenario. You can use it in a meeting and classrooms to record the lectures.

After you have recorded your files, then Otter generates the summary keywords for easy discovery. When you playback the recordings, it syncs the words in the transcription with the audio files, which makes reviewing notes a lot much more easier. Otter is freely available on the Play Store, but you will get a capped limit of 600 minutes per month.

Call Recorder by the Lovekara is a free call recording app that you can use to record your call automatically. The app lets you save all of your recorded calls in the MP3 format. You can even save the calls on your smartphone, or you can transfer them to an external microSD card if your phone does not support it. Moreover, there is no cloud integration option available. Also, the app is supported by the ads, and there is no paid version to remove the app. Still, the app is good at what it is supposed to do and is totally free so that there is not much to complain about.